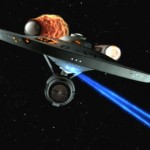 Due to some random link-clicking I ended up on the Star Trek Phase II website, which I had not been on for several years... This is the site of a group of Star Trek fans that spend considerable time and energy on creating new episodes of the original series. It is interesting - and frankly quite amazing - how far fan-films have come!

Their latest episode - Blood And Fire - has amazing production values way beyond any of the original Star Trek episodes and probably even better than most of what you've seen on Next Generation. The torrent site at the link above has both parts 1 and 2 of the double episode.

The story of Blood And Fire is very deep and is based on a script that was originally developed for a never-realized Next Generation episode. It deals in one story arc with homosexuality, and in a pretty action-packed main story line with a rescue from a bloodworm-infested research vessel while the Enterprise is under attack by Klingons.

But what is really standing out is the technical quality of the show - the props, the lighting and the color coordination are spot-on and the special effects are quite impressive.