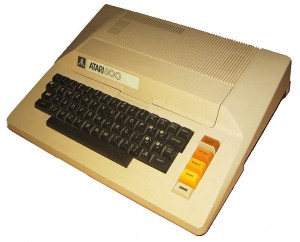 The Atari 400 and 800 were both based on the 6502 CPU and had a number of custom chips that definitely pushed the envelope in the late 70s and meant that close descendants of these machines were still being sold in the late 80s.

I very much remember the first time I saw an Atari 800 in person back in a office supply store in my hometown in Germany - it must have been 1982, when most affordable home computers where small plastic boxes with the simplest possible keyboards, often no sound, and quite often black-and-white TV video output.

The Atari 800 towered over these other machines, with cartridge ports under a neat lid in the top and the large keyboard in an extremely heavy case. And that machine was able to provide very robust graphics and amazing sound for the time.

Many hours were spent "testing" that machine and the few games available in that store, but I never bought an Atari 800 until much later when I got myself an Atari 800XL in the mid-80s when they were on sale for ridiculously little money after the Atari ST series machines had come out.

The 8-bit Ataris, during most of their production time, were overrun by cheaper competition, chief among them of course the Commodore C64, which had a slightly simpler architecture and a cheaper price, which helped in attracting huge sales numbers worldwide and as a result of that the full attention of software developers everywhere.

There were many great early arcade game conversions for the Atari 800 and I have very fond memories of both Mr. Do and Dig Dug among others. An original release for this machine was Lucasfilm's Rescue on Fractalus - which made the most of the limited 8-Bit machine and certainly was one of the highlights of this era.