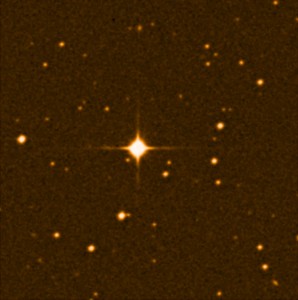 We are living in exciting times!

The search for planets outside of the solar system has been heating up considerably over the last few years and we have now hundreds of planets in our maps in a slowly expanding sphere of several hundred light years from earth.

However due to the current detection systems, our exploration skews heavily towards larger gas giants very much like our own Jupiter and Saturn. Earth-sized planets are much harder to detect across the void of space.

But now we have our first breakthrough: The red dwarf star Gliese 581 (picture courtesy of Digital Sky Survey / ESO) seems to have at least six planets, where two discovered over the last few years are borderline near the habitable zone - and one recently discovered planet at three times the mass of earth sits exactly in the center of the habitable zone!

This is amazing news on so many levels. This can be seen as a first hint that earth-like planets may be much more common than even the most optimistic researchers had been hoping for - it's extremely unlikely that in our Milky Way galaxy the only two planets in habitable zones sit within twenty light years from each other - the Milky Way has more than 100 billion stars and is nearly 100,000 light years across. With a hundred billion stars (100,000,000,000+) we are now potentially looking at millions of planets in habitable zones.

Tonight, look up and wave. Somebody out there may be waving back!