China officially recognizes 56 ethnic groups in the country, a fact that is easy to overlook when one travels through the major population centers which look dominantly Han. A trip into the countryside very often reveals a different picture, with smaller villages sporting very different faces and sometimes also different attire from the typical Chinese street clothes. 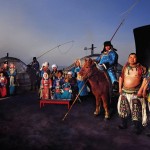 Here is a gorgeous look at the 56 ethnic groups (long page with big photos), from the western deserts to the eastern ocean shore and from Russian enclaves in the far north to tribal villages in the jungle near the Burmese border.

I wasn't able to find much information about this amazing photo shoot, but it is obvious that serious funding and much work was involved in creating these unique tableaus - each of the photos must have taken several days to prepare and clearly much care was taken in selecting the members of each community and in encouraging them to put on their traditional clothes.