On one of my routes to work I walk through what was once called the Latin Quarter, that then became the Italian District and is now known as North Beach.

I just recently learned that this was once the Latin Quarter when I was reading a book with anecdotes from San Francisco by Almira Bailey. She wrote about the life in this city in 1921 and she was still using Latin Quarter as the name for what was then already a predominantly Italian neighborhood.

I usually cross Columbus on Stockton and walk up Telegraph Hill past the groups of elderly Chinese that dominate Washington Square in the mornings with their exercises. Their rhythmic shouts of "Yi - Er - San - Si" are now part of my daily morning walk, as are the tourists lining up at Mama's Cafe for breakfast and the fire fighters of Station 28 preparing their equipment in front of the fire station. 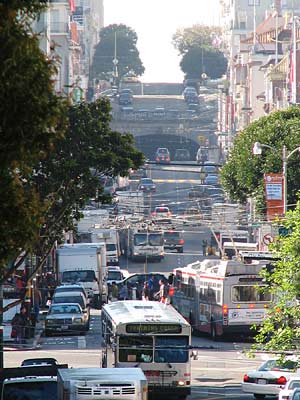 Just when I pass the fire station, at the highest point of Stockton Street, I've noticed a very peculiar thing about the view of Stockton Street to the south - since the street rises at a gentle grade up to the Stockton Tunnel, you can take a picture of all of Stockton street from Columbus to Sacramento, a distance of seven blocks.

Here is the picture as it appears with my Canon S2IS with its large zoom. Seven blocks of Stockton all the way across Chinatown compressed into one shot.