I've been talking about vintage MJB Coffee ads in San Francisco before, and while I was researching that blog post back then I remember seeing references to a second "Why" ad in San Francisco, but I could never find an address for it.

A few weeks ago that problem solved itself when I was walking along Columbus Avenue and just happened to look up at the houses across the street from the City Lights bookstore. 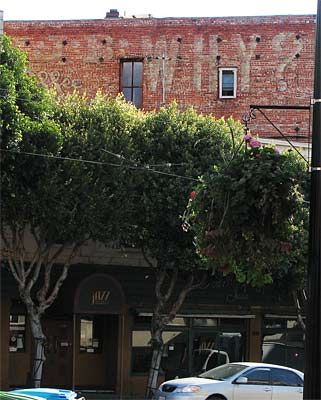 The two ads happen to be only about six blocks from each other - the first ad is on Clay just above Stockton and this one is on Columbus and Kerouac Alley.

The two ads look similar, but this one on Columbus seems to be a little bit less elaborate in the painting style. It is known that these ads were painted around 1906 and it must have been after the earthquake, since both houses are in an area were barely a wall survived the earthquake and firestorm of 1906.

I'm still looking for a well-rounded explanation for the message of this ad campaign. MJB Coffee - WHY? sounds very much like it is only one half of a more complex ad message. Was this supported by newspaper ads or billboards? Was there a little story around this ad on the tin cans the coffee came in? Inquiring minds would like to know...