Brooks Cameras in San Francisco is closing their doors after more than sixty years in business and this week was their "Everything Must Go" sale. The staff there found a lot of old boxes in their storage area that probably hadn't been touched in decades and among many other things there were a couple of vintage photographs.

I bought the two photos below and have been looking for clues about their history and the two men in them.

The pictures were taken by Oscar V. Lange in his studio on Market Street in San Francisco between 1883 and 1886 and the two men pictured are Sheriffs in the San Francisco Sheriff Department. I've been trying to identify the older of the two gentlemen by his medals and by comparing his picture to the gallery of Sheriffs at the SDSF, but I've had no luck yet. 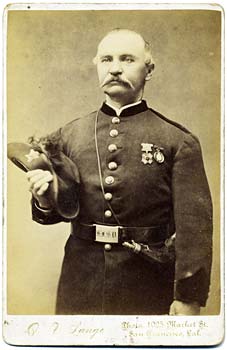 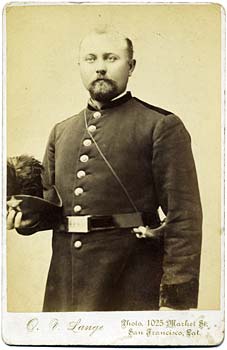 The pictures are at least 121 years old. These two police men were walking the streets of San Francisco at the tail end of the Gold Rush, fighting crime in the wildest, roughest city on the West Coast.

They are contemporaries of Samuel Clemens, aka Mark Twain - who they quite possibly might have known as a local journalist - and they were already old men when the Big Earthquake came around...

I'll try to find out more about these two men, and hope that maybe somebody here on the blog can provide me with some hints on how to go about it. For starters, I'd welcome any tips on the two medals the older man proudly displays on his breast.