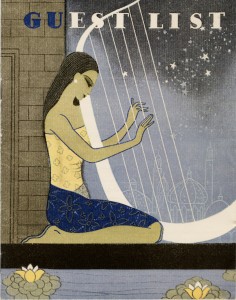 A while ago I bought this item on eBay - it was essentially a random find that intrigued me. It is the guest list of the 1936 round-the-world trip of the S.S. President Monroe out of San Francisco. (link to full scan of all pages on Flickr)

The annotations on the actual guest list are original - whoever our traveler was, he or she marked some of the passengers. Dinner companions? Easy marks for Bridge games? Suspects? Spies?

This was probably the last year in the 1930s when a four-month trip around the world like this could be thought of as vacation. But tensions are already rising.

The day after the Monroe leaves San Francisco, the Olympic Games in Hitler-controlled Berlin begin, and near the end of the trip the Rome-Berlin Axis is formed.

Imagine the conversations on board.

These are the last people to see many of these places in colonial times. But from port to port, the old world is crumbling around them...