This is my latest vintage camera - the Kodak Duex. 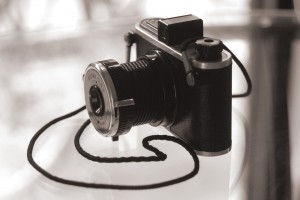 The Kodak Duex is a very unusal 620-format camera with a helical telescoping lens cylinder made from bakelite, creating photos with a negative size of 6x4.5cm. It was only made for a very short time from 1940-42 at a cost of $6, approximately $167 in todays money using the unskilled wage index. 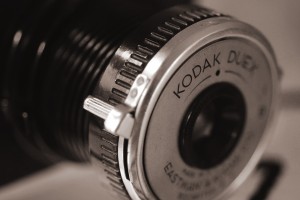 The Duex is very simple with essentially no controls other than a B/I switch and the shutter, both of which are at the front of the lens assembly and are a little bit awkward to reach while looking through the viewfinder. The simple, spring-loaded shutter button has a lot of travel before the shutter fires, which makes it hard to get steady shots at the fixed 1/30th speed. There is no double-exposure protection. 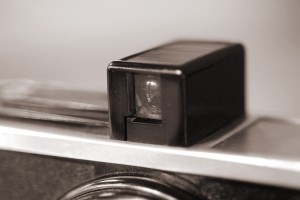 The camera feels very different from most other Kodaks of the 1930s and 40s due to the lens mechanism and the materials used and it's a rather rare camera nowadays since it was only made for two years during World War II and other than a low price had not much else going for it. 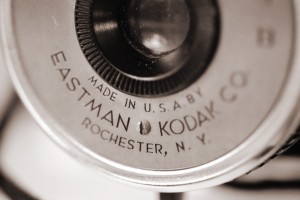 With modern eyes, the Duex has a certain late-Art-Deco charm all its own and the sturdiness and simplicity of its construction makes it an easy, carefree and light travel companion, something that can't be said about many medium format cameras.

As with other 620 format cameras, it can still be used with re-rolled 120 film, since both film formats are the same size, only the spools are slightly different between them.

Like many of the simple 620 format cameras that Kodak made over the years, it can produce surprisingly good photos. Daylight photos generally came out a little soft in focus, with a mild camera shake due to the problematic placement of the shutter button being the main cause.

Here is a shot of the San Francisco Ferry Terminal in heavy fog taken with the Duex. The Doublet lens has the typical 1930s/40s era depth of field, which gives these photos their distinctive old-fashioned look. 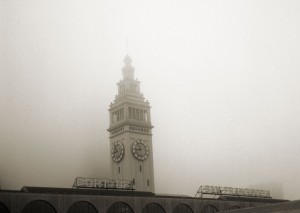