The Third and The Seventh 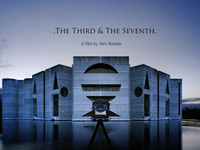 Alex Roman has spent a year creating one of the most astonishing CG short films that I've seen in a long time: The Third & The Seventh (HD version at vimeo).

The film can be best described as a meditation on architecture, photography and the sense of space and depth in the world around us.

Alex Roman recreated several modern buildings as 3D renderings and then uses some quite amazing craftsmanship to give the viewer a sense of depth with very subtle animations where the virtual camera slowly floats through the buildings, with ever so slight changes in focus.

Many of the effects are so subtle, especially in the first half of the film that I didn't even believe that I am looking at CG rendered versions of the buildings. Alex has a great sense for lighting and clearly must have spent many hours tuning the lighting set ups to create extremely photorealistic settings. Only in the second half of the film, when he introduces surrealistic effects, does it become apparent that we have been looking at computer graphics all along.

Here is a video with some of the scenes as compositing breakdowns in case you want to see a peek under the hood of several of the scenes in the film.

It should be mentioned that Alex also created the soundtrack for the film, making this all around a major tour de force.