Update: As it turns out, my original research was not correct - Temple Emanu-El was located between Powell and Stockton, not Mason and Powell... I've made several substantial changes below to reflect this new information

For a city with barely 160 years of history as a dense urban environment, San Francisco has undergone remarkable changes. Here is a small panorama of Nob Hill from the corner of Market and Third that was probably taken in the early 1870s. 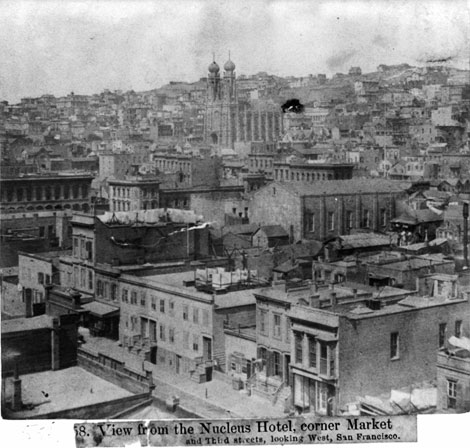 The houses in the foreground are on the north side of the 100 block of Geary Street, which of course has undergone many changes. In fact, due to several earthquakes and blazes in the 1800s and the Great Earthquake and Fire of 1906, very few of the buildings in this photo could still be around. To the left in the picture are the buildings around Union Square... and most intriguing to me, in the center is a long-lost house of prayer with a very distinctive silhouette.

I found this photo in the Library of Congress archive and none of the buildings were identified, so I randomly browsed more pictures of that era to see if I could find out more about that building. 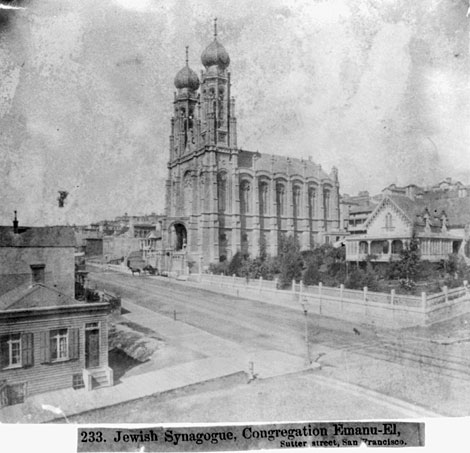 I had never heard of this synagogue before - and in fact, the congregation still exists, but had moved to Laurel Heights in the 1920s after this building had been damaged in the earthquake of 1906.

This is an interesting photo (click for a large version), since Sutter Street looks positively rural here. We are looking at the corner of Sutter and Stockton, the building on the left has made place for the gargantuan Hyatt Hotel tower and the neat little house across the street with the huge garden is now buried under a Hannspree store.

This photo also gives us a very good location for the synagogue - it was at about the spot where the parking garage for the 450 Sutter Medical Building is now.

Not sure if Sutter Street is surfaced at this time, it looks almost like it's just dried mud with what could possibly be rails for horse-pulled cars in the center. These are probably not cable car lines, since the cable car didn't make it to this block until 1879, according to the information from the Cable Car Guy. The area looks too freshly built up to me to be from that late.

This is also one of the first times I've actually seen wood-decked sidewalks in a photo of San Francisco. And it looks like somebody just parked their one-horsepower buggy in front of the synagogue. 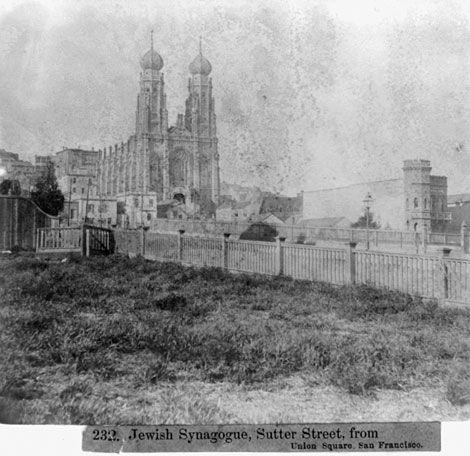 Here another shot from Powell Street near Post looking north towards Sutter Street and the synagogue.

The label points out (correct, now that I have located the true address of the synagogue) that this was taken from Union Square, which in the mid-1860s was still an open meadow from the looks of it. Where the photographer stands it seems it has never been touched by a shovel - the grass is very au naturel. 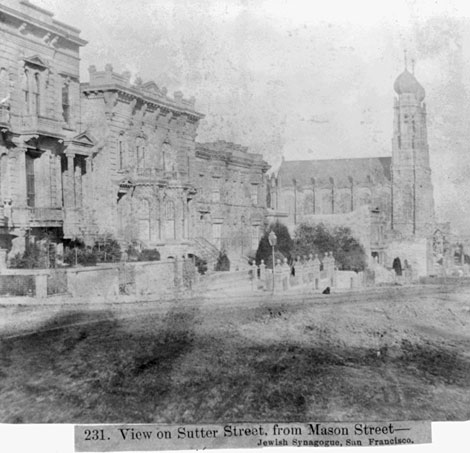 Yep, definitely packed mud as road, which must have been hell during the rainy winter season with the steep grade of our hills. This last shot is from the intersection of Mason and Sutter looking east, down Sutter and across Powell towards the synagogue. The houses uphill from the synagogue on the block between Powell and Mason are much more substantial than in the other photos, similar to houses that still exist in the Pacific Heights neighborhood.

The gardens are a bit questionable with the one three houses down being full of tall shrubbery to conceal the first floor windows from the road and the garden closest to the camera seemingly being used to raise Christmas trees.

I was very happy that I've followed up on the first photo - the synagogue was a substantial building in a still very young San Francisco and I'm glad I've learned something about it and the times when these shots were taken. At this time, the peak of the gold rush had just been over for maybe ten years, and none of the buildings in any of these shots is older than fifteen years - Mark Twain was in town and these are the streets he walked in as a young reporter for the Daily Morning Call, a local newspaper.