While idly searching the Library of Congress archive for old shots of San Francisco I stumbled over the photo below (click for a very large version) - It shows Market Street from between Stockton and Grant towards the East, with a clear view of the Call Building over an elaborate arch that spans Market Street. 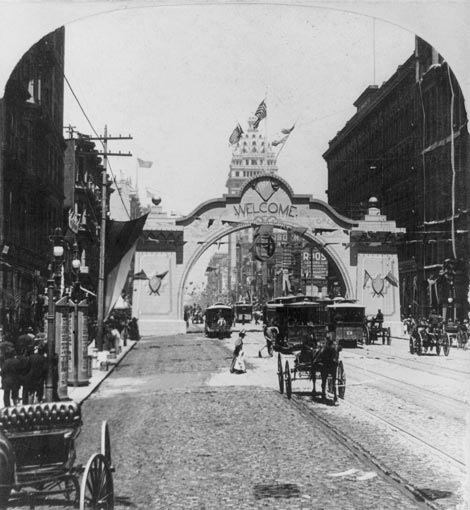 Now, I've spent some time looking at historical photographs of San Francisco, and I've never seen that arch before.

The photo was taken by B.L. Singley from the Keystone View Co. as a 3D stereograph, and the Library of Congress dates this photo to 1899, but looking at the numbered sequence for other photos of the Keystone View company would move this shot into 1897 - where other photos by the same photographer document a "Christian Endeavor Parade" on Market Street in July of 1897.

The convention of the Christian Endeavor Societies seems to have been quite an affair - here is a quote from an article in the New York Times from July 5th, 1897:

"This city is a sea of color, the decorative ribbons of the Christian Endeavor Societies, the Stars and Stripes, and the bunting hung in honor of the National Holiday floating in the breeze..." - this sounds very much like a description of the scene in the photo.

The article further chronicles the arrival of several thousand convention visitors, and a local reception committee of more than a thousand.

I haven't been able to find any other online resource that mentions this arch and it is conceivable that it was built to welcome the convention guests in 1897 and then torn down in spite of its rather elaborate design, but there is one more wrinkle in this story... the Call Building was not finished until 1898!

So either my theory is wrong, or the exterior construction of the Call Building was already finished by July 1897, which would make this one of the earliest photos of the then tallest building west of the Mississippi!