On the last day of 2007 we took a walk on Baker Beach below San Francisco's Presidio. The sun was out for one last appearance in the old year and the afternoon was glorious with clear skies and almost no wind - which is unusual for our area.

The sun was very low in the sky and lens flare was unavoidable - especially with my "new" Kodak Vigilant Six-20 f/6.3. Yes, I already had a Vigilant, but with the f8.8 lens, and I had a suspicion that my problems with that camera were connected to the cheap-ish lens. So it was time for an upgrade.

I'm honestly not sure yet if this f/6.3 lens is any better, but I will run more film through the camera to find out. Click on the picture for a larger version. 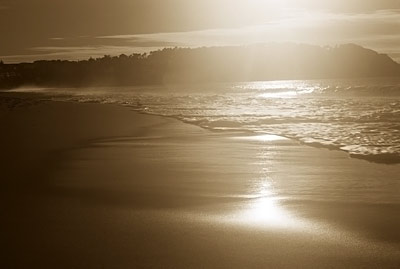