Since we've bought a new scanner I've been going through some of my negatives for a second pass, and this is one of the "rescued" photos that I couldn't scan well before.

This is Spofford Alley in the heart of Chinatown in San Francisco,one of the oldest and mostly untouched alleys that criss-cross several blocks in this neighborhood. At night this alley echoes with Mahjong games that take place in every basement, storefront and upstairs apartment. It's one of my favorite places in Chinatown, but also one that I find very hard to take interesting pictures of.

I took this shot with one of my Kodak Jiffy Six-20s late at night on my way home after work. The Jiffy is always a bit of a risky camera to shoot with, there is just not much control over the lens or the shutter. But the simple lens has surprised me more than once with its very rich colors, especially during long exposures at night.

This photo was taken on Fujicolor Superia 100 color negative film - and now looking at the leftover rolls I have here, the film may already have been expired when I took this picture. Click for a larger version. 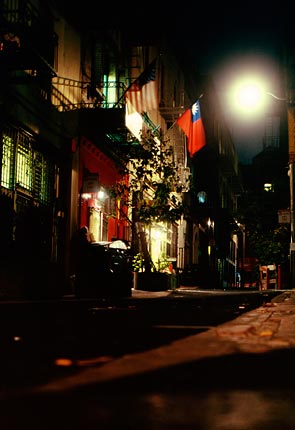